Subscribe Now to get the Media Moves Newsletter every Monday, Wednesday and Friday. Straight to your inbox - including the latest Media Events!

Whizy Kim has joined Vox as senior reporter covering billionaire power and influence. She was previously a senior writer at Refinery29, where she covered the work and money beat and wrote about various topics, including student debt, Covid relief policies, the billionaire space race, and professional burnout. Before that, Kim was a writer and editor at Korea Air.

The Washington Post has named Liz Seymour deputy managing editor for news operations and planning. She serves as a liaison between News and many other parts of The Post, including finance, human resources, legal and security. Seymour has been at the paper since 1999 and most recently served as the executive features editor for the past eight years. Before that, she spent five years in Metro before moving to the Home section as deputy editor, and is the founding editor of Local Living.

Robert Medley has been hired as editor of the Times Record, the daily newspaper in Fort Smith, Arkansas. He was previously the managing editor at the Yukon Progress, Piedmont-Surrey Gazette and Okarche Warrior, all weekly papers in Oklahoma. Prior to that, he spent almost 15 years at The Oklahoman.

The Hollywood Reporter has promoted Aaron Couch to film editor, upped from senior editor of THR's Heat Vision blog. In his new position he will oversee a team of film writers producing news, analysis, investigative pieces, business insights and features. Couch's second stint at the magazine started 2016 and before that he worked briefly as a staff TV editor at People. He was a staff editor at THR from 2012 to 2015.

Adam Behsudi has rejoined Politico as news editor for economics and finance. He spent the past two years at the International Monetary Fund as a communications officer, where he edited and wrote content and strategized messaging for the IMF Blog, Finance & Development magazine, newsletters, videos, and more. Behsudi has previously worked at Politico from 2013 to 2020, where he helped launch Politico’s trade coverage.

The Associated Press has announced two promotions at two of its bureaus:

TIME magazine has hired Lindsay Muscato as senior technology editor. She spent the past year-and-a-half at MIT Technology Review as editor of the Pandemic Technology Report, and before that worked as a project editor at Vox Media. Muscato also helmed OpenNews as editor in chief, where she strengthened and supported the community of data journalists, developers, and designers in newsrooms by running a publication documenting their behind-the-scenes work.

Emily Anthes is the newest reporter at The New York Times, where she focuses on science and health and covers topics like the coronavirus pandemic, vaccinations, virus testing and Covid in children. Anthes joined the health and science desk a year ago as a temporary reporter and has also spent 15 years as a freelance science writer.  Her work has appeared in The New York Times, The New Yorker, The Atlantic, Wired, Nature, Slate, Businessweek, Scientific American, The Washington Post, and elsewhere.

The Houston Chronicle has tapped Chris Fusco as managing editor, effective March 21. Fusco is a former executive editor of the Chicago Sun-Times and left the paper in 2020 after 20 years. Most recently, he was the executive editor of Lookout Local's first news website, LookoutSantaCruz.com.

Alicia Adamczyk has joined Fortune as senior writer. She joined the magazine from CNBC, where she spent three years as senior money reporter. Before that, Adamczyk has worked as a writer at Lifehacker, a reporter at Money.com, and a business/lifestyle reporter at Forbes.

STAT News will welcome Tara Bannow later this month to cover hospitals and insurance as a reporter. Most recently, she was a senior reporter at Modern Healthcare and covered hospital finance for almost five years. Before that, she covered medicine and healthcare for The Bulletin, Central Oregon's daily newspaper.

Haley Sprankle has joined WIRED as product writer and reviewer. She was previously an editor at Policygenius, a leading online insurance marketplace. Before that, Sprankle has written for Wirecutter, VH1, and Garnet & Black Magazine.

Peden Doma Bhutia has joined Skift as Asia editor and reports and edits coverage of business of travel in Asia, the Middle East and India. She is based in India and before that served as the editor of ET TravelWorld, the B2B travel vertical of the Economic Times, which she helped to launch. Doma Bhutia also spent four years as the editor of DDPPL and its travel publications.

The Information has tapped Maria Heete as a full-time reporter working under the crypto/VC/finance umbrella. She starts in late May 2022.  She was most recently a computer science tutor at Pitzer College and before that interned at Bloomberg News.

The Wall Street Journal has welcomed Beth Pinsker as personal finance editor for Wall Street Journal Commerce, a separate content team from the paper's main newsroom. She comes to The Journal from Fidelity Investments in Boston, where she was director of editorial services. Pinsker has also worked as a columnist and deputy personal finance editor at Reuters and has held editorial roles at DealNews in New York and AOL.

CNBC has announced a couple of moves in the digital newsroom and one on the 'Fast Money' broadcast:

WTTW-TV, the PBS station in Chicago, has promoted Nick Blumberg to on-air/digital reporter. In his new role he’ll cover enterprise, investigative, general assignment news and feature stories for “Chicago Tonight.” Blumberg has been a producer at the station since 2014.

Carly Haynes has been promoted to co-anchor of the 4p and 10p newscasts at WCAV-TV, the CBS affiliate in Charlottesville, Virginia. She joined the station in June 2020 as a multimedia journalist and was quickly promoted to her most recently position of weekend anchor and reporter.  Prior to that, Haynes was a news intern at NBC News in Washington, D.C.

Telemundo has welcomed two former Univision hosts: Myrka Dellanos and Giselle Blondet. Both are longtime Univision hosts and will join Verónica Bastos and Alix Aspe as part of Telemundo’s new weekday afternoon entertainment talk show 'La Mesa Caliente.' Dellanos was previously a co-host of Univision’s 'Primer Impacto' for 12 years. She was also a guest host on 'The View' in 2006. Blondet was part of the inaugural hosting team of Univision’s Despierta América in 1997.

Jobs: You can search and advertise a range of vacancies with us, whether it's a permanent, contract or freelance position.

Media Moves: Keen to shout about a new job, change of beat, new launch or pick up some commissions? Email us.

The Cision research team makes thousands of media updates to our influencer database each day! If you have a media move, send it to mediamoves@cision.com. Also, follow us on Twitter at twitter.com/media_moves. 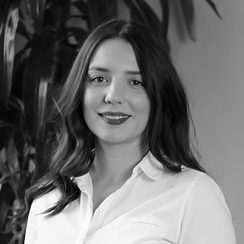 Anna Marevska is an editor and writer for Cision Blog, and writes media updates, media influencer and industry features. She is also the senior manager of content and client data at Cision’s research department, and the editor of FashionFilesmag.com. Find her on Instagram @AnnaMar3.