Why World #PressFreedom Day Should Matter to Brands

May 3, 2017/in Featured, Trends /by Annemaria Nicholson

Journalists are still trusted, but believe that the public trusts them less due to the subversive censorship tactics of special interest groups, the inflamed political climate and brands that aren’t totally honest in their PR practices. According to this year’s Review of Free Expression in Canada from the Canadian Journalists For Free Expression (CJFE), 76 per cent of Canadians agree or somewhat agree that the labelling of legitimate news outlets as “fake news” is damaging to our democratic process. Without free press, there will be no avenue for brands to tell their story. Capitalism fettered by democracy demands that truths be told, even if they are uncomfortable. This is good for business and good for our country. That’s why it’s more important now than ever for brands to do their part, to be ethical in their relationships with journalists and for them to support free press around the world.

The media attention that companies get can positive or negative. Sometimes news stories make the public uncomfortable. Often the news can be raw and eye-opening and has the power to change the course of industry and the world. And that’s ok. That is how it must be. For without the ability to see unrestrained and uncensored truth, we are not free.

We as humans hold journalists to a higher standard. Members of the media put their lives on the line every day so that they may reveal dangerous and evolving world affairs in real-time. And we don’t need to look very far to see the risks they take in order to get the truth out.  According to The New York Times, more than 100 journalists have been killed in Mexico since 2000. The dangers the press face heighten when government and society fail to support journalists.

“Freedom of expression here becomes a myth,” said Daniel Moreno, director general of Animal Político, an independent news organization in Mexico. Given “the fact that the authorities have proven they are incapable of solving most crimes against journalists, and are often the perpetrators of this violence themselves, then we can legitimately say that journalism is in a state of emergency in this country.”

Sure, it’s easy to say that this sort of thing can happen in Mexico, where stability and safety have always struggled to transform from dream to reality.  The Canadian Charter of Rights and Freedoms protects the Canadian media and our people with the laws we’ve made to govern ourselves: 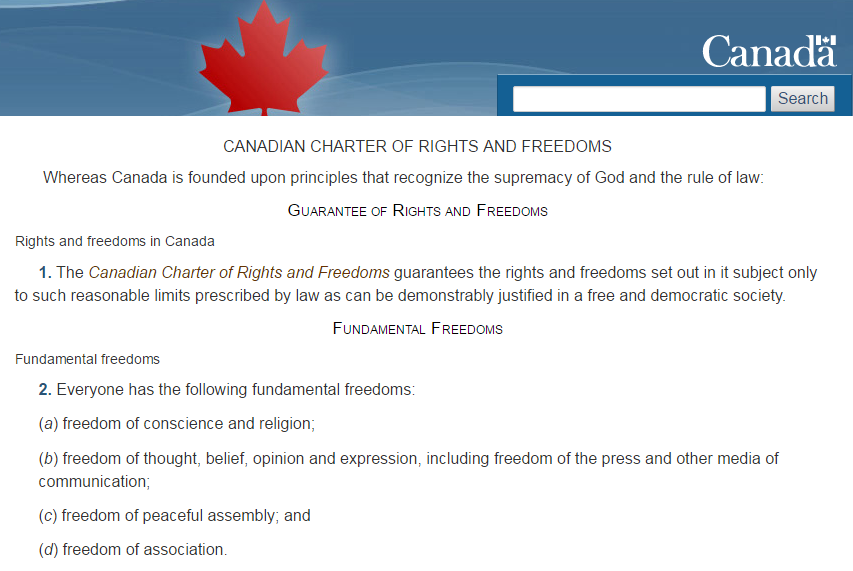 But what is the power of a law if there is no government support to uphold it, or will of the people to stand by it? Playing it safe can seem like the easy path for brands to take. But is it the right choice?

Richard Levick in the recent livestream Breaking Down the State of the Media said, “We’re entering a generation where drinking a Starbucks coffee and wearing Nordstrom shoes is suddenly a political statement. Companies need to understand the buying habits of the brands but also the politics of their customers. We’re at a more emotive point. Brands are becoming symbols within themselves.”

There’s also no denying that it’s in brands’ commercial interests to operate in a free and fair society. After all, the North American dream is the idea of building something from nothing, to create from scratch something that did not exist before, and to thrive and prosper so that you may live a comfortable life and give back to the society that helped you get there in the first place.

Companies cannot lose sight of this. It’s easy to “do it all for the bottom line”. It’s easy to stay silent and not take a stand on current events. But sometimes the difficult choice is the right choice. By supporting the press through honest PR practices, by giving back to community, but upholding ethical standards in all that they do, companies can help ensure that the American dream and the laws that govern it stay in place permanently.

Without free press, there can be no brand story.

At a time when 81 percent of senior marketers believe earned media is more effective than paid media, brand success relies heavily on the merit-based earned media that journalists provide. A free, objective press is critical for society; it allows the press to call it like they see it. And while people still have more faith in earned media than paid and owned, journalists perceive they are now struggling to maintain the public’s trust.

Image source: The 2017 Cision State of the Media Report

Confidence in the media has recently eroded due to the recent U.S. presidential election, the rising belief that mainstream media is fake news, and other critical factors including shakeups at major organizations. Our 2016 timeline infographic highlights some of the monumental challenges that affected journalists last year.

Journalists want high quality content from brands so they can write better news stories. Journalists cited news releases and story leads as their #1 most valuable PR resource in the Cision State of the Media Report.

Journalists also trust news release distribution providers that vet companies and adhere to editorial standards that prohibit libelous materials. But brands also must do their part by providing newsworthy elements, doing legwork for journalists and using trusted distribution services rather than just relying on social media alone to tell their story.

PR and communications professionals must also focus on relationship-building rather than spamming journalists with valueless promotional messages, which makes it harder for the media to do their jobs. PR pros have a duty to be respectful of journalists’ time, and not to mislead them or to take advantage of them.

Without honest and aboveboard relationships between the press and the companies they report on, there is no brand story. That’s why it’s critical for companies to enable journalists by providing accurate, compelling content, every single time.

Brands must do their part to support #PressFreedom

Brands must stand alongside journalists by supporting them with honest, original and human content. Companies need to get emotional. When brands “create a compelling, fact-based emotional story that not only evokes an emotional response but also satisfies the brain’s need for verifiable research,” companies are helping journalists and the media tell a true, authentic story that drives the audience forward, that ignites passions, and spurs people into action.

Brands, in a sense, have become people too. That means that although their opportunities to participate in civil discourse and campaigns has never been greater, they also must hold themselves to a higher standard, just as individuals strive to do.

We must be ethical with headlines by avoiding clickbait, with content by being honest and original, and most of all we must have a conscience and a written code of conduct to follow in the form of editorial standards and content guidelines. Companies can also take actionable steps when creating content to avoid the fake news label themselves so that when they communicate with the press and the public, their message comes across clearly and honestly.

Brands must stand up and help combat the fake news censorship tactics that special interest and opposition groups use as a weapon against dissidents (dissidents in this case being the free press and their institutions).

When censorship and fear are used to stamp out press freedom, this is dangerous for all of us. Fact-based reporting becomes dangerous. When baseless claims and personal opinions replace a trustworthy and free press, then that can prohibit the Truth from reaching the public and an uninformed public inhibits the health and free-exercise of democracy. Thomas Jefferson said, “An educated citizenry is a vital requisite for our survival as a free people.” He is right. We have an obligation to always hold truth in the highest regard, and to always strive for it, in everything we do, and build it into the very foundations of our brand strategies.

We must stand up for journalists everywhere, so that we may continue to live in a society that values truth, even if that truth makes people uncomfortable.

I drive go-to-market strategy for content, social media and community at Cision, an earned media software intelligence company. I engage, educate and inspire audiences with interactive and multimedia projects that serve all areas of the funnel and have experience scaling content programs globally to drive brand awareness, leads and revenue for the business. I revolutionized Cision’s outbound promotion efforts to amplify its inbound lead generation results by creating a multichannel campaign strategy that promotes discoverability, search rank, audience awareness, credibility, and ultimately more topline revenue growth. I also helped with our rebrand and watched Cision go public in 2017, and our blog program was honored in 2018 by PR Daily.

Airline brand executives are moving towards delivering better customer experiences. Here's how you can do the same.