In the 1960s and 70s Prime Minister Pierre Trudeau’s words and actions became synonymous with Canadian identity and bringing in such vast quantities of headlines that reporters dubbed it Trudeaumania, a play on Beatlemania sweeping North America at the same time. Fast forward 45 years and the Trudeau craze is back, this time on social media and with the younger man of the family, new Prime Minister Justin Trudeau—Pierre’s son. 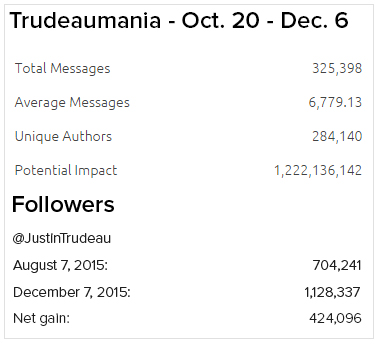 Justin Trudeau has been called everything from a lightweight to a rock star and is currently on a favourability honeymoon in Canada with a poll by Ekos Research suggesting that more than 70 per cent of the population is satisfied with the election result. Using Cision’s social media monitoring tools we’ve tracked the new Prime Minister’s rise in popularity over the past five months to get a clear sense of how big of an effect Trudeaumania could have on the world. Since the election he’s been mentioned more than 325,000 times on Twitter and Instagram giving him a potential reach of more than 1.128 billion people, if every follower of each person who mentioned Trudeau read the message. 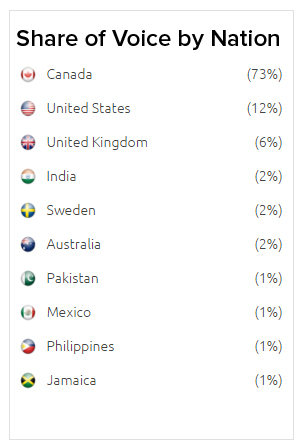 Furthermore, his Twitter follower count has increased by 62.4 per cent to more than 1.1 million since in August. This isn’t just a bump from taking office either. Outgoing PM Stephen Harper failed to breech one million followers despite nearly a decade in power.

Beyond social media, Trudeau makes headlines wherever he goes. During November’s APEC Summit in the Philippines, residents voted Trudeau the #APECHottie beating out Mexico’s President Enrique Pena Nieto for the unsolicited prize of Most Attractive Politician in Attendance.

Then on November 26, the BBC featured Trudeau on its current affairs television show News Night, one of the network’s most popular shows with a typical viewership of close to 600,000 United Kingdom residents.

Just four days later while at United Nation’s 21st Conference of Parties (COP21) held in France, he announced in a well-documented speech that, “Canada is back my friends.”  On that day alone Trudeau received more than 10,000 social mentions and headlines in major publications like the Globe and Mail, The Toronto Star and the New York Times.  While close to 75 per cent of the messages mentioning Trudeau originated in Canada, Americans held 12 per cent of his share of voice followed by the United Kingdom with six per cent.

Time will tell if that momentum and Trudeaumania will continue around the world.

Want to learn more about how we monitor personalities? Read our Guide to Social Media Monitoring today!

Amazon has long been a financial conundrum. Writers like Farhad Manjoo of the New York Times have written extensively about...