If someone asked you how much time you spent with media (news, TV, online video, podcasts) how long would you say —four, five or even 10 hours? A study published in April by Emarketer says that the average Canada spends more than five hours consuming video and as much as nine hours of media as a whole.

If you aren’t using video in your communication strategy you are missing five hours of messaging opportunities. 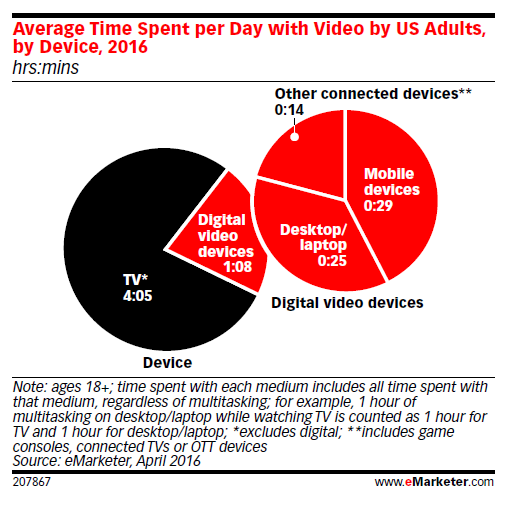 For professional communicators that means we have more than half someone’s workday to fill with targeted marketing messages, which then presents the challenge of creating content they actually want to consume and engage with. As Ron Tite said earlier this year in Cision’s Innovation Imperative E-Book, “Content is what people want to consume opposed to what people have to consume.”

The study found that what people want to consume most is video. Time spent with television on digital video online and through our smartphones takes up close to six hours of our daily lives the study reports.

The rise of video

With the expanded use of smartphones in 2012, mobile video viewing grew by 218 per cent between 2011 and 2012 and tablets had become household appliances. Who doesn’t have an iPad or Microsoft Surface laying around, right?

Tack on the growth of streaming services like Netflix in the following years and video gobbled up our evenings like Pac-Man collects dots. This past year mobile video grew by only 10 per cent and Emarketer forecasts single digit growth in the years to come.

How we manage to consume so much content in a day

The study’s methodology counts multi-tasking as separate content engagements. Meaning, when you are watching TV and surfing the web on your smartphone for an hour, those activities account for two separate hours of content engagement.

When you pair that with the fact the average Canadian working a fulltime job is getting about 7.5 hours of sleep a night, you build a picture of a life consumed by media.

While Canadians read and watch a lot of online content, we still engage 2.5 fewer hours than the average American. In other words, there is still room for us to grow!

Want to produce more creative video for your brand?
Connect with our team to learn about our video production services.

Blogging Done Right: Learn To Research Like A Pro

Hear from research and fact-checking expert Jon Greenberg of PolitiFact's Truth-O-Meter. Learn how to research like a pro and create...