When a child goes missing, it is the job of the police to take action, both on the street and in social media. Just after 5:00 p.m. on Sunday, an Amber Alert for a three-month-old baby went viral in Toronto. A thief stole a car with the baby in the back-seat while the father chased the vehicle on foot to no avail. By 5:30 p.m. the alert began to trend on Twitter and within just a few hours the baby had been found safe.

Police services across the country are using social media to engage with the public and drive public safety. We spoke with Constable Allyson Douglas-Cook, a nine-year veteran of the Toronto Police Services, to learn how she engaged with the public during Sunday’s Alert.

“It (the public’s response) was greater than anything that I’ve seen before,” said Douglas-Cook. 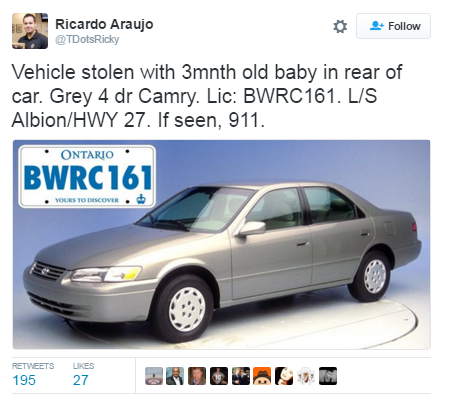 In the hours after posting the alert, Toronto Police received hundreds of social messages offering tips and encouragement. Messages sent by the police received more than 1,000 retweets and hundreds of replies to each message. Constable Douglas-Cook followed up on tweets speaking with the media and responding to the public, all on Twitter.

The team shared minute-by-minute updates with all of the details available at the time, including a photo post social of the make and model of the car in question and its license plate number.

By late Sunday evening the three-month old baby had been found in the stolen car, abandoned in a parking lot.

“Awareness is integral to our operations,” said Constable Douglas-Cook. “When there is an issue, we tweet it out so that people are aware and safe.”

Each social message could be a potential lead on a crime. To help manage this growing engagement Toronto Police Services has doubled its digital response team to six officers in the last year. Each has their own Twitter account from which they engage directly with the public. They also operate the two Toronto Police Services accounts @TorontoPolice and @TPSOperations.

Transparency is the goal of engagement

Today 50 per cent of Constable Douglas-Cook’s job is engaging with people on social media to accomplish three main goals: awareness, information collection and media relations.  Informing the public about safety issues such as fires, road closures, and active investigations like Sunday’s Amber Alert is top priority. The team will share information about police activities as they happen and answer questions the public has in real-time in an effort to gather information from the public, which helps drive investigations.

“We always depend on the public to act as witnesses and their engagement on social media is invaluable,” said Constable Douglas-Cook.

The Work Habits Destroying Communication Professionals (And How To Avoid Them)

Is work killing you? Avoid these three habits and get more out of work and life. Find balance and be...