How Influential are Presidential Debates?

This year each of the three presidential debates have been pivotal moments in the campaign. Hindsight might prove me a fool but for one of the first times in the last 40-years debates have affected the polls.

Hillary Clinton has gained an estimated 5 – 7-points on Donald Trump in the days and weeks after the first two debates. That’s nigh unprecedented. Polling isn’t in yet from the third debate, but Cision has conducted an post-debate analysis that shows how good the debate may have been for the former Secretary of State.

In our analysis we showcase how bots could be affecting the election as reported by CBC. Watch the clip below to see how Twitter traffic around the debates is being manipulated. If people see fit to manipulate the results of the Twitter discussion for Trump or Clinton the debates must be impactful.

2. Twitter users are being locked into their voting decisions.

With every debate that has passed the number of Twitter comments has dropped by 20 percent.

What that means is that more voters have made their decisions. 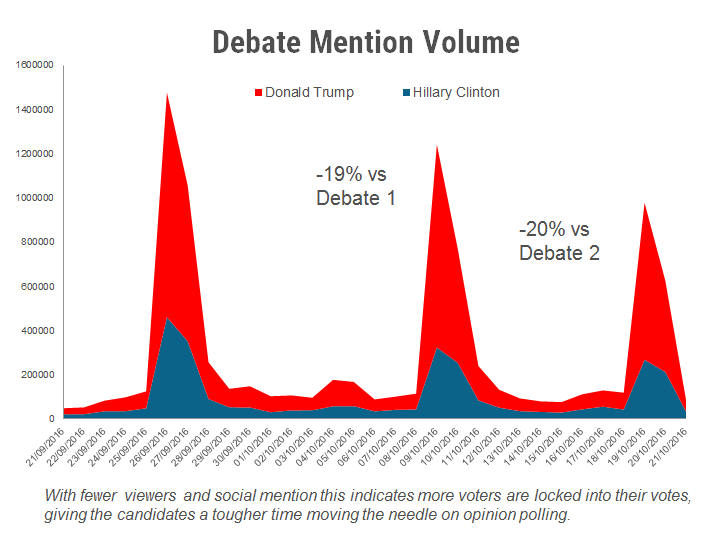 Two other examples come to mind but with lesser effect. The first is when Jimmy Carter lost his lead against President Gerald Ford after Ford had an infamous gaffe. The sitting President incorrectly asserted that in 76’ Eastern Europe was not in-fact dominated by Soviet Russia. This is an embarrassing moment, the Soviets absolutely dominated Eastern Europe at the time — the sky was not pink, the world was not flat — but whatever effect it supposedly had didn’t register in the polls. Carter had been losing ground to the sitting President and that trend just continued after the debate, gaffe and all.

The second recent instance is in 2012 when President Obama had a four point lead in the polls before he first debated Mitt Romney. This turned to be one Obama’s worst debate performances ever — his lead vanished and the race tightened. One weak performance led to a four point decline.

With Clinton now up seven points on Trump, and fewer and fewer voters caring to pay attention all signs point to a Clinton victory. Of course, with this election cycle another can change at any minute.

Is your Company Spokesperson Properly Prepared?

This post originally appeared on Newswire.ca   An unprepared or untrained spokesperson can be a ticking time bomb for your...