How Disney, Google and Snapchat are Changing the Game for Native Ads

Forget placing your content in-stream as a native ad, Disney has partnered with Google to place ads inside its applications. 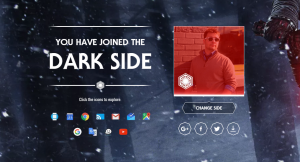 Star Wars fans are a huge market that transcend nationality and generations so turning to the most popular website with the most popular tools in the world makes sense. Google has welcomed that by helping Disney create a Chrome Extension application that rebrands Google Translate, Gmail, Maps and YouTube with Star Wars promotions for anyone who installs the extension.

Gmail can choose to be either on the Dark Side or Light Side of the force and have themed backgrounds and loading screens within the program. Google Translate users can select Aurebesh as a language to translate other language into (Aurebesh is fictional language created in the Star Wars universe). The Star Wars takeover even turns cars into Tie Fighters or X-Wings in Google Maps.

Even though Star Wars fans would probably create application integrations out of the goodness of their hearts (and never ending fandom), Google is getting a lot of out the deal too. Disney has created a virtual reality (VR) experience built for the Google’s Cardboard VR system, which Disney describes this as an unprecedented collaboration. That includes four virtual environments for Star Wars fans to enjoy making Disney the world’s largest entertainment provider by promoting Google Cardboard and bringing virtual reality to the mainstream. The VR experience will be available on Dec. 2.

From a public relations standpoint, the campaign has made a lot of positive news article highlighting how novel this partnership is.. Articles ran on Variety.com, Screen Rant, Wired and even The New York Times. 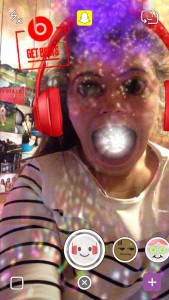 Disney and Google aren’t alone in their application advertising plans. Beats by Dre partnered with Snapchat to create a sponsored lens for the platform allowing people to transform themselves in video. This filter places Beats headphone on a user’s head, adds a disco ball spinning in their mouth, and simulates musical energy erupting out of their heads.

While traditional native advertising and sponsored content lives within a platform, this new tactic co-opts the platform itself for a more integrated experience. Utilizing this tactic means marketers need to understand the technical aspects of the chosen platform and the expected user experience for the promotion. Snapchat does this really well with its sponsored Geofilters, filters only available to users are in a certain city, branded artwork enhances the visual storytelling experience for users who are using Snapchat while travelling.

In the context of Google’s Star Wars experience, the benefit is that superfans are given exclusive content and a way to engage more deeply with their beloved film universe.

Star Wars will be released to theatres on December 18 until then, may the force be with you.

* Efforts have been made to contact both Disney and Google, at the time of publication no comment has been made.

As a Managing Editor, Dawn Walton lives in the moment, making (and remaking) decisions all day long around editorial priorities,...