How Canada Views the U.S. Election

For an American election, Canada is brought into the conversation quite often. Donald Trump has said he wants to wall off the border, Senator Bernie Sanders often discusses his admiration of our health care system and even the East Coast’s Cape Breton Island has been flagged as a site for America’s great migration north; should residents dislike the outcome of the election. 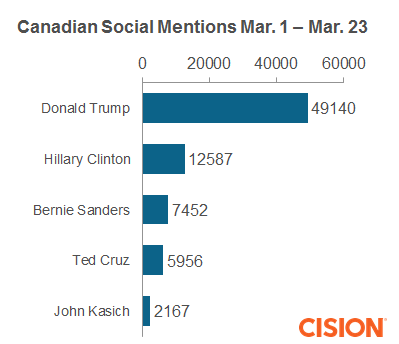 We know what Americans think about their election, but what about us Canucks?

Between March 1 and Mach 21 Cision monitored the Canadian conversation on social media platforms relating to the US election. Turns out we’re fascinated by Trump, we think Hillary Clinton will beat Bernie Sanders and the topics we care about most are the economy and foreign policy.

Canadian interest in the election centralizes on billionaire Donald Trump’s bombastic campaign. In the last 23 days there have been more than 5,000 news articles published by Canadian websites and the majority of the social conversation happening is sharing of these articles and editorials.

Between the Republican Primary contenders there is little interest in anyone but Trump. Ohio Governor John Kasich, receives little attention in the Canadian media and only 4 per cent share of voice on social media, with fewer than 2,200 mentions in March. 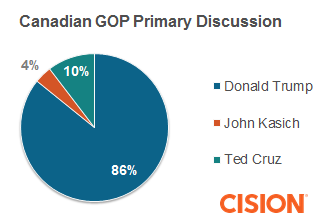 Hillary Clinton is the second most often discussed candidate and, while her share of voice trounces Bernie Sanders, she has about one quarter of Trump’s mentions. Canadian columnist even doubt whether she can beat him in the general election.

Ted Cruz, who is actually Canadian by birth, received fewer than 6,000 social mentions in the same period, proving that the Alberta-born candidate has no home field advantage.

The lesson: the news media can directly impact Canadian perception and the volume of a discussion. 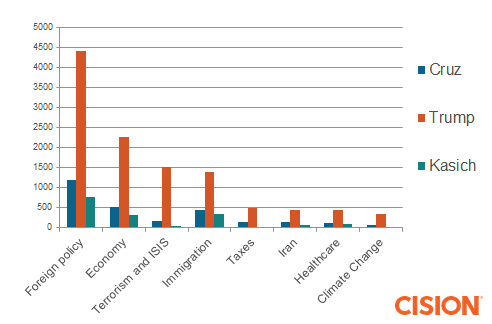 Canadians are most interested in candidate policies on international relations, the economy, terrorism and immigration. This is particularly true for Trump’s position on these issues.

Canadians most often discuss his foreign policy position regarding a proposed boarder wall between Canada and the U.S., his plan to ban on Muslim immigration, and his proposal to send Syrian refugees back to Syria. Each of these conversations is shared hundreds of times a day by Canadian commentators.

19 per cent American’s plan to flee to Canada

One thing we haven’t measured is how we feel about Americans moving north, yet it should be our number one concern.

On March 1, Google Trends results found a 350 per cent increase in the number of Americans seeking information on moving to Canada. This interest has been confirmed by a poll by Ipsos Reid, released on March 10, of more than 1,000 Americans that found 19 per cent plan to immigrate to Canada should Donald Trump win the election. By comparison, the same poll indicated 15 per cent of respondents said they’d flee to Canada if Clinton won.

In either case, such a migration would triple Canada’s population of 35 million people and represent the largest voluntary exodus in recorded history.

Learn more about Canada in our 2016 State of the Media report!

Steve Faguy, a media enthusiast, maintains the “Media Ownership Chart” on blog.fagstein.com and writes for the Montreal Gazette.   Follow him @Fagstein.  ...