CTV’s morning show Canada AM is ending its 43-year run today. This leaves another hole in the Canadian media landscape that will not be filled by traditional broadcasters.

Randy Lennox, president of entertainment production and broadcasting at CTV’s parent company Bell Media, said in a statement that the evolving television landscape caused the cancelation.

“As the television landscape continues to evolve, so too must our programming. We look forward to building upon the success of Canada AM as we move forward,” said  Lennox.

What’s killing the Canadian media? According to Mark LaVigne, principal of Hunter-LaVigne Communications and lecturer with Centennial College and Western University, it is two things:

Both of these make it harder for PR practioners to get airtime.

Cord cutting up 80 per cent year over year

Fighting for the attention of producers or reporters is harder when there are fewer broadcast TV shows. According to LaVigne, communication professionals need to better align the current reality with the expectations of our clients. Fewer television stations and even fewer TV watchers impacts what campaign goals should look like.

“Clients love TV newscasts, but it can be very difficult to get on broadcast news,” said LaVigne. “You can get on the morning show, but the effort in doing so is enormous and at the same time the audiences are dropping.”

Last year, according to Convergence Consulting Group an estimated 190,000 Canadians dropped their cable subscriptions—that’s and 80 per cent increase from 2014 when 105,000 people cancelled.

Audiences haven’t disappeared says LaVigne, but they have changed their viewing habits.

“Everything is on demand,” said LaVigne. “It is the Uber-ization of content delivery and broadcast hasn’t been able to keep up.”

He further forecasts that we’ll soon see television news broadcast only through a platform like Apple TV, or Netflix, if anything at all. Here are the facts:

– 7.2 % reduction in total operating revenues for conventional television in Canada since 2011

– Live television events such as the Oscars and large sporting events are the only television advertising spaces to see growth.

– Fewer people are watching day-time or morning television — with people preferring to read their news on smartphones.

Media convergence has reduced the number of news holes

Netflix shouldn’t shoulder all the blame though. Media organizations have hemorrhaged money since consumers adopted the Internet as the content vehicle of choice. This forced media companies to consolidate to the point where a few powerful companies own almost all of the Canada’s private media.

Media consolidation is a trend 35 years in the making. LaVigne cites the 1981 Kent Commission on Newspapers, which identified media consolidation as a risk to national sovereignty.  This isn’t a new trend but it has reached a critical point in recent years. 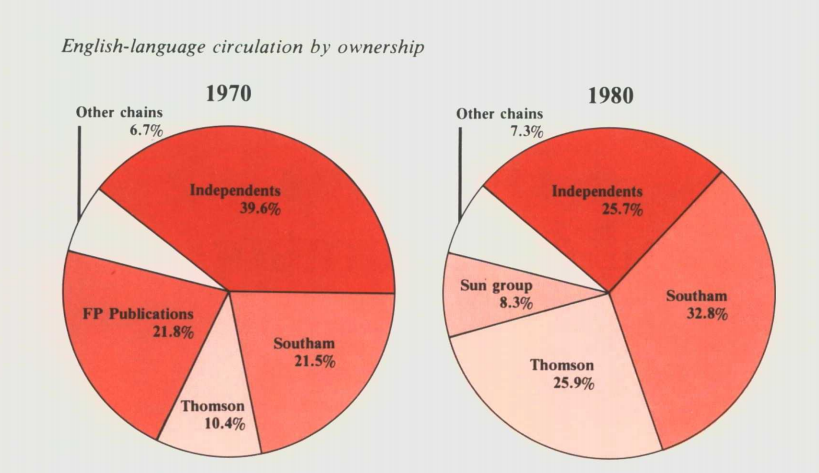 In the early 1980s, the commission feared that a 15 per cent decline in independent newspapers from 39.6 per cent in 1970 to 25.7 per cent in 1980, belied real danger to Canada’s fifth estate and our ability to tell uniquely Canadian stories.

What it means for communications professionals is we need to work smarter and more digitally with fewer papers and fewer reporters than ever before. Now the same can be said about broadcast news.

It is time to build relationships with content creators who build media on YouTube or producers of shows that are designed for Netflix. If viewers have moved away from television then we have to as well.

Canada AM may be one of the largest profile shows to shut down in Canada but it will certainly not be the last.

Learn more about the State of the Media read Cision 2016 report based on a survey of more than 200 Canadian journalists.

How to Build a Canadian Brand: Advice from CEOs

Canada is the most diverse country in the G8. With more than 7 million foreign born residents, one of the...