Not all newsrooms are shrinking, some are adding offices and headcount while earning new sources of revenue through partnerships and sponsored content. Last night, the Canadian Federation of Journalists held its first J-Talk panel since the election of Donald Trump at the TMX Broadcast Centre in Toronto. Between exhortations about the state of society, the three panellists, Jennifer Hollett, head of news and government at Twitter Canada, Craig Silverman, editor at BuzzFeed Canada, and Michael Gruzuk, director of news and digital content for VICE Canada (as well as host Simon Houpt, the Globe and Mail’s senior media writer), shared insights into businesses that a decade ago were pilloried as the D word … disruptive. 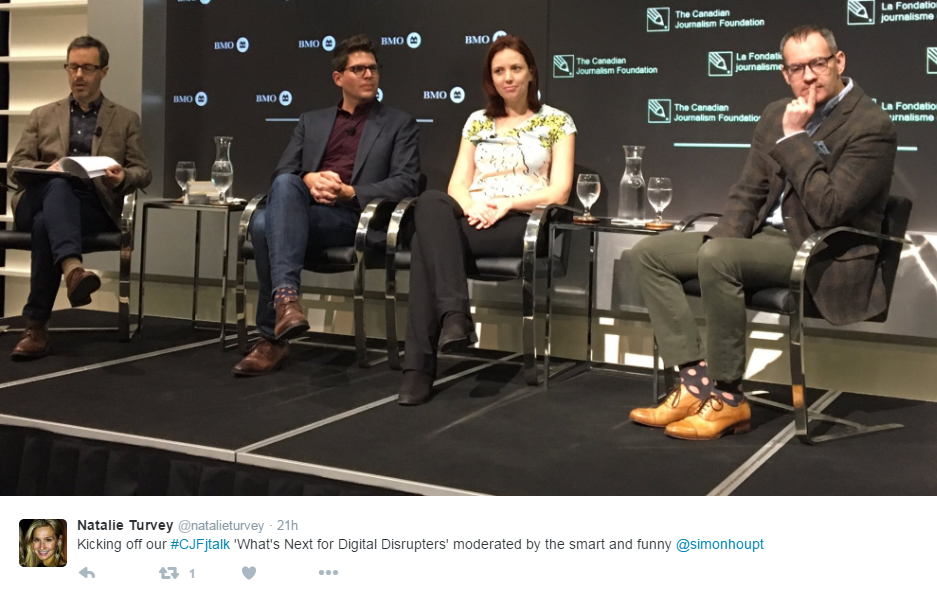 A decade on, all three have seen growth, even while Twitter’s may have reached a plateau of late, Vice, BuzzFeed and absolutely Twitter are strengthening their influence.

For Twitter, growth be damned, the President-Elect of the United States of America endorsed the brand’s ability to spread messages on CBS’ news program 60 Minutes.

“Twitter the bird has 99 percent brand recognition,” said Hollett. “People want an unvarnished view and they want a way to connect.”

Unvarnished has its issues. Hollett announced that Twitter had just launched new tools to allow people to mute entire hashtags to curb abuse.

This change will make it possible for users to duck and cover from hateful speech, turning off message trends that crowd their feeds and offend them.

The host began the night with a jibe about how often the word bullshit is used on Vice, for the record throughout the evening the phrase popped up at least six times. It is that crass style which has led to some criticism of Vice Media, but Gruzuk says that his organization doesn’t necessarily need everyone’s admiration and respect. It is making money, growing and doing so around the world.

“Our strategy is global and we have great partnerships,” said Gruzuk, sharing that VICE’s news content and its nightly news broadcast is helping the brand reach valuable audiences.

At the same time, VICE is presenting content that isn’t as buttoned down as what you’d find in a traditional newspaper with curse words and all. Regardless, Gruzuk explained that at its core VICE’s goal is to deliver great journalism.

“Field journalism is the basis of some of the best journalism in the world,” said Gruzuk. “… but going places is expensive.”

If VICE is the hipster black sheep of mainstream media family then BUZZFEED is its goofy, yet well-connected brother. On election night this year, Buzzfeed and Twitter partnered up to deliver five hours of live broadcast television, which included hosts taking shots on air while they processed Donald Trump’s revelational victory.

“It took us a month to produce those five hours, mostly, because we were looking at pictures of corgis,” said Silverman jokingly. “In Canada, we have seven people in editorial and four in business; I don’t view what we do in opposition with the mainstream.”

BuzzFeed came into Canada in March 2015, which was announced at that year’s Dx3 Conference, and even before jou 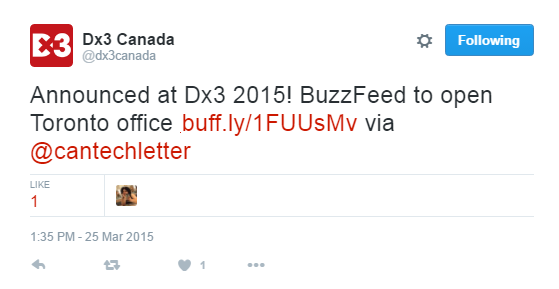 rnalists were hired the company had booked revenue, listicles and quizzes worked.

BuzzFeed Canada has two divisions, a news group and one for entertainment and it is that unbridled creativity that is helping it grow. If you spend any time on Facebook you’ve seen video recipes from a channel called Tasty which has more than 74 million likes on Facebook. More than 2,000,000 of those are from Canadians and yes, BuzzFeed built that.

“How many pages have that much engagement from Canadians?” said Silverman. “We give content creators the chance to dive into new mediums saying ‘here go create content just for social for four weeks’ that’s incredibly valuable experience.”

If BuzzFeed can help support great writers while building powerhouse creative content, all the better.

This post originally appeared on Newswire.ca  Everyone has their favourite colours, but do they inherently impact one’s purchasing decisions? You’ve...