More than 100 exhibitors and 4,000 attendees took part in Dx3—a two-day technology, marketing and retail conference—at the Metro Toronto Convention Centre on March 2 and 3. Both exhibitors and education sessions featured discussions about creative content, innovations, and ways to incorporate video into your marketing and PR strategy.

Increasingly, people are seeking out video content as a medium to consume those experiences. Snapchat has 8 billion videos viewed every day according to the company’s February 29 report, making the five-year-old video sharing platform the largest video publisher in the world.

Knowing this, if you aren’t using video today, you are missing out on a highly-trafficked medium for your campaigns. 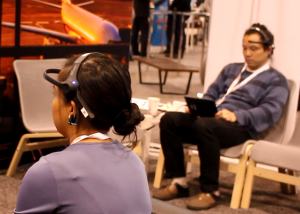 Neural analysis company Brainsights, which exhibited at Dx3, has shown that great video content can persuade people subconsciously and even effect their perceptions on issues or influence purchasing habits. Video can reach people in ways that they can’t defend against the company’s research states, tapping into decision making centres in the brain.

During the conference, the company measured attendees’ mental response to campaign ads from the 2016 United States Presidential election using electroencephalogram (EEG) monitors that measure peoples reaction to the ads they watch by monitoring brain waves.

“It is scary but a lot people respond positively to Trump in a raw and emotional way,” said Keane. “One part of that is how he is on video and the way he speaks.”

The lesson to glean from Trump is to create videos that are simple and emotional.

Your brand needs a face to attract attention.

Humans are hardwired to look at and analyze faces. Even babies do this — we can’t fight the instinct. Researchers at the Georgia Institute of Technology and Yahoo Labs studied 1.1 million Instagram photos and videos and determined those featuring a human face are 38 per cent more likely to attract likes and 32 per cent more likely to attract comments.

As more people use tools like Snapchat, or Periscope to tell visual stories about themselves visual video literacy will increase. If you aren’t experimenting with video as a format today your brand could be illiterate in the future.

Read all about visual storytelling in our e-book! Want advice on shooting great video, check out our piece on live-streaming.

Toula is a freelance writer and editor, current affairs panelist on BazzoTV, women's issues contributor on MAtv, columnist for Ricochet...