They say a team is only as strong as its weakest link. Well, when handling crisis communications, you don’t want any weak links – especially not in the go-to spokespeople and PR representatives. Hard skills like writing and research are basic necessities but the ability to build relationships, lead teams and stay organized is equally important. These three soft skills can make the difference between a complete brand meltdown and finding a silver lining from a worst-case scenario.

Beyond making connections with the media and journalists, a PR professional has to be able to nurture internal relationships with executives, who become the key stakeholders to ending a crisis quickly. The development of those relationships in the weeks, months and years before a crisis presents itself allows you to find the right information internally, receive executive buy-in on a response, and get that response into the public with haste as a quick response can often prevent tidal waves of criticism.

The best crisis management technique is to never have one in the first place. One way to do that is to be a proponent of ethical business practices in the boardroom and present yourself as leader at all times. When executives suggest an idea, imagine what the worst headline around that plan could be. If that headline is overtly negative or the message could be misconstrued, suggest an amendment to that plan to improve the public’s perception.

Volkswagen’s ongoing emissions crisis could have been prevented by professionals by illustrating the negative impacts to the business that ongoing deception can incur. Remember, your standing with the media relies on their trust of you as a source.

If you aren’t organized when times are calm, you will completely lose your mind in a crisis. Make a plan, use a calendar and move forward in your career as eye of a communications storm, instead of a trailer park that is unfortunately in its wake.  As part of the day-to-day, you are responsible for these three elements:

1. Communications planning: Choosing when, what and—most important—why a brand should be discussing any specific topic

During a crisis, the same three elements are required, but the stakes are infinitely higher and the timeframe around their delivery is shortened. Here’s a great example. 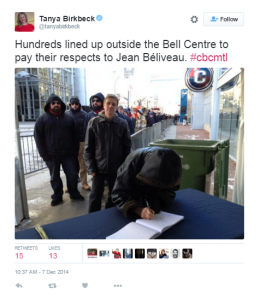 When former Montreal Canadiens star centre Jean Béliveau died, the team’s Senior Vice-President of Communications Donald Beauchamp jumped into action. He planned communications outreach efforts with former players, helped organize a state funeral with current and former Prime Ministers in attendance, and even setup an in-state viewing for fans at the Bell Centre in Montreal. Thousands of fans paid their respects.

Think about what goes into holding an event at an arena for thousands of fans at the same time organizing a funeral with international dignitaries and collecting commentary from former players. Without having a network in place, staying organized and being a team leader, none of this would have been possible.

Learn more about putting these three soft-skills into practice, read our white paper on Managing Crisis in a Social World.

This post originally appeared on Newswire.ca   Today’s post focuses on Search Engine Optimization (SEO) and explains how to kick-start...