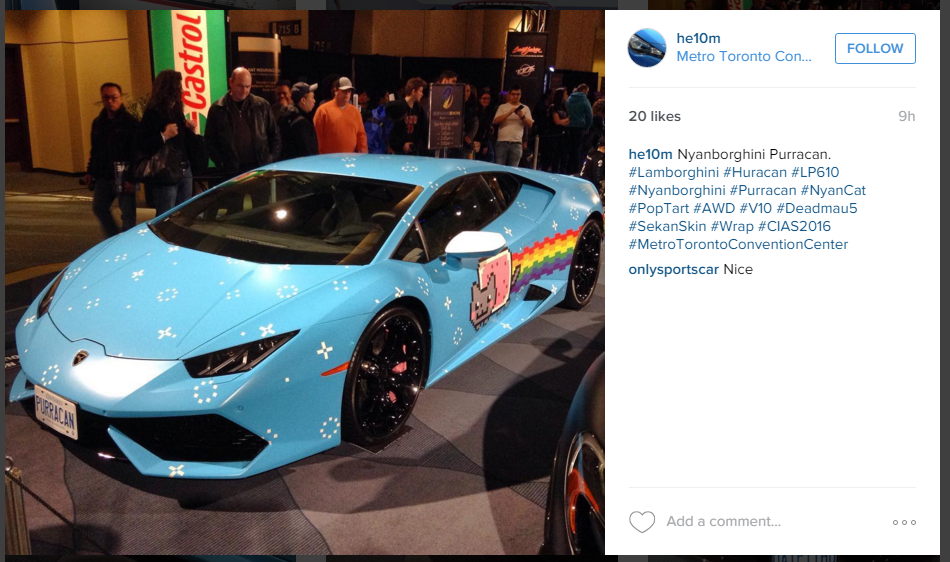 Millennials are the fastest growing car-buying market and auto-manufactures are trying to piece together marketing methods that work. The problem, as CBC News framed it, is that millennials aren’t easily swayed by traditional themes of freedom, power and or the youth-focused gimmicks like coolers in the glove box. What they want instead is reliability, connectivity and reliability.

While the latter might be what millennials are buying, they aren’t sharing new SUVs on social media. There supercars brands like Lamborghini and Maserati still come out on top as they have for decades in the dreams of car buyers.

Using Cision’s social monitoring tools we listened into the conversation at this year’s Canadian Auto Show, which kicked off in Toronto on February 12, to find out which messages and car manufacturers cut through the gridlock.

Between the first day of the show and February 16, we’ve tracked more than 9,800 social media mentions of the event’s official hashtags #CIAS2016, #YOURMOVE and #CIASYourAuto. These posts have a potential to reach more than 41 million people. That’s a lot of motor heads!

More than 400 mentions across Instagram and Twitter, the most of any one specific vehicle, spoke of two supercars on display at this year’s show. The first: Toronto-based DJ Deadmau5’s Lamborghini dubbed the Nyanborghini Purrcanna, named after the notorious Internet meme Nyancat that is featured as a car-wrap, received 238 mentions alone.

Competing for the most mentions with for Lamborghini is the #SelfieLambo courtesy of Black List Rally, a five-day rally race from the US to Canada. The car’s vanity plate says just that “SELFIE” and a decal on the windshield features the hashtag. While it didn’t get the same traction as the Nyanborghini Purrcanna, it did generated 121 mentions during our monitoring period.

The success of both of these vehicles’ social footprint goes beyond the simple design of the car to the car makers enablement of sharing photos of them on social. No longer just a prop to be admired, the hashtags make them approachable and prime for social media fodder.

Gull wings a big hit in the media. 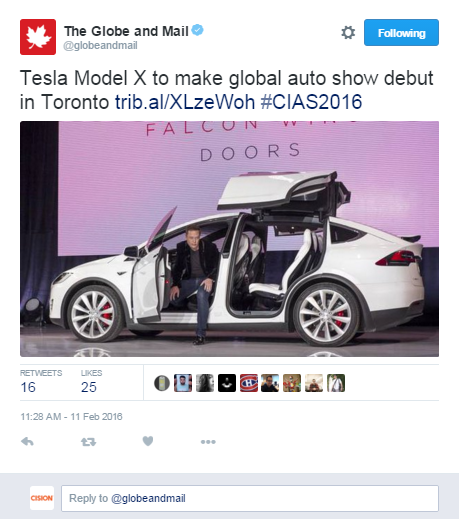 Tesla is using the show to officially debut of the production version of the Model X to the public, giving attendees the first chance in the world to peek inside the electric SUV crossover—which is four years in the making. The supercar has an electric driving range of more than 400 KM and can reach speeds of 60 MPH in 3.2 second—a comparable speed to the gas engine Lamborghinis mentioned above. A product launch at an event is a great way to generate media interest, which Tesla proves with coverage by CBC News, the Globe and Mail and popular automotive blog Double Clutch. One reason this launch succeed is that the auto show featured the Tesla X prominently in a press release about the eco-future of the automobile industry. Tesla is continually in the news for its innovations showcasing an accessible production model that helps connect the conference’s focus on the future of the automotive industry — ecology and technology.

If you aren’t sourcing opportunities for win-win partnerships at events you are attending you are missing valuable media exposure and brand awareness.

CIAS2016 has created a valuable space for manufactures to showcase vehicles by leveraging brand partnerships and facilitating social media experiences that foster brand engagement on its show floor. Last year an estimated 300,000 visitors visited the show, if social activity is any indication this year will be another roaring success. We’ll continue following the social conversation through the show’s end on February 21. Check back for more insights.

How to Generate Coverage From Conferences

All brands want mentions in trusted third-party media outlets. But are you even investing in long-term strategies that will help...